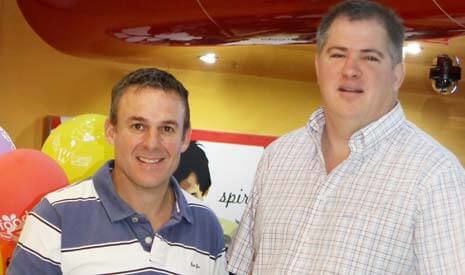 Famous Brands, Africa’s leading branded restaurant franchisor in the food service leisure category, with representation in South Africa, 15 African countries and the United Kingdom, has opened its milestone 2 000th restaurant, Wimpy Durban North, in KwaZulu Natal (KZN). This restaurant brings the total Wimpy network in Africa to 509, with a further 128 Wimpy restaurants in the United Kingdom.

Famous Brands CEO, Kevin Hedderwick says, “It is fitting that our 2 000th restaurant is a Wimpy located in KZN, the birthplace of the very first Wimpy restaurant ever opened – in 1967 – in Durban.”

Hedderwick notes, “Our 2 000th restaurant is a significant milestone for us. In an intensely competitive marketplace, this achievement is evidence of the strength of our brands and testament to the support we enjoy from our loyal franchise partners and customers.”

“Significantly,” comments Hedderwick, “notwithstanding this investment in personnel, over the past five years we have delivered compound revenue growth of 23%, and compound growth in operating profit of 26%.”

Hedderwick clarifies, “Our 2 000th restaurant is not an indication that we are going to let up on our ambitions for the business. We are eager to embark on the next chapter in the Group’s history, and we continue to focus on the question: ‘where to from here?'” Hedderwick notes that the Group is comfortable with growing its footprint in its home markets of South Africa and Africa. “At this point we believe there is more than enough growth potential for our brands across the Southern African continent – and we have no desire to become a global business.” Famous Brands, formerly known as Steers Holdings, is credited with the introduction of the fast food concept in South Africa and later the establishment of a franchising model for the industry. Famous Brands today holds the broadest product and concept portfolio in the South African food service industry. The Group was listed on the JSE in 1994 and in 2004 the holding company changed its name to Famous Brands, to reflect more accurately the diversity of the Group’s brand portfolio.

Over the past decade the Group has undertaken a series of audacious acquisitions and today the extensive franchise network is complemented by a well-established and vertically integrated business model. Recent acquisitions include:

2003: Pleasure Foods (Pty) limited, comprising the Wimpy and Whistle Stop brands, and the franchise agreements of the House of Coffees and Brazilian brands.
2005: TruFruit (Pty) Limited, a manufacturer and distributor offruit juices, and Baltimore Foods (Pty) Limited, a manufacturer and distributor of ice-cream products.
2006: Bimbo’s franchise agreements at selected Engen garage sites and successful conversion to Steers.
2007: A 75% interest in Wimpy UK.
2008: A controlling interest in the tashas brand.
2009: The South African and African business of Mugg & Bean and a further 20% of Wimpy UK.
2010: The trademarks and franchise agreements of KEG, McGinty’s, O’Hagan’s and Blacksteer; a controlling stake in Giramundo, a flame-grilled peri-peri chicken offering, and Vovo Telo, an artisan bakery and café business.
2011: The trademarks and franchise agreements of Milky Lane and Juicy Lucy.

In terms of the 2 000th restaurant, Hedderwick comments, “Our Wimpy Durban North franchisees Gavyn Hough and Chris Farrant are experienced multiple-restaurant operators from KZN, having joined the Debonairs Pizza family around 12 years ago in Durban. This formidable partnership, personified by their relentless focus on customers and quality as resulted in them being regularly crowned franchisees of the year in the KZN region for both Steers and Debonairs Pizza. Their entrepreneurial flair and hands-on approach has seen them grow their network of restaurants to over 20 (17 Debonairs Pizza and 4 Steers restaurants) and they have now taken the plunge into the casual dining market with the opening of their first Wimpy in Durban North. We wish Gavyn and Chris every success in their latest venture.”

“It has been a pleasure to do business with Famous Brands over all these years. The Group has a proven track record because the franchise model is sustainable, it benefits both the franchisor and the franchisee. We are excited to add Wimpy to our stable as we have seen the steady growth in the casual dining sector especially where customers are looking for a quality product at a reasonable price. The breakfast component also complements our existing folio of Steers and Debonairs Pizza restaurants which are mainly lunch and dinner orientated,” Hough adds.

Hedderwick concludes, “The culture we have created in this Group centres on growth: we intend to continue growing and unlocking value for shareholders. We are acquisitive by nature and believe there is still a lot of upside for our business in the food service industry.”

In commemoration of its 2 000th restaurant, the Group will be making a R20 000 donation to ‘Save the children KwaZulu Natal’, a humanitarian, non-profit organisation dedicated to promoting the rights of children in KZN.